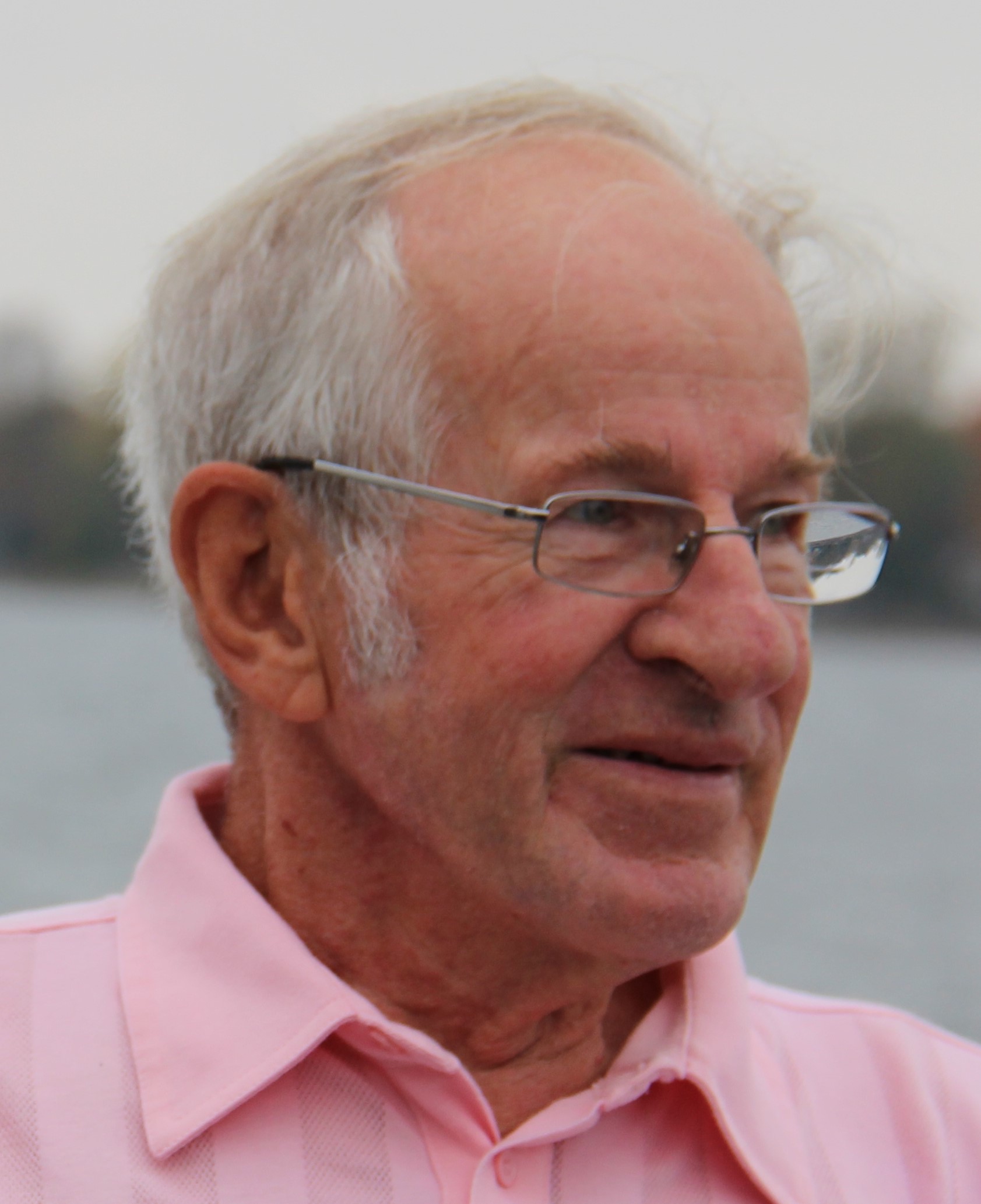 He was born in Lacolle to the late Elmer and Blanche Robinson. Proud father of Brent, Craig (Josée), Kirk (Denise), Tracey (Tim), grandfather of Bianca (Jason), Jaclyn, Denise, Jason (Ève), Jessie, Trevor, Brendan, Tori, Tina, and he was GGpa to Tessa.
Survived by his brother Alan and sister Jean, and sister-in-law Willo as well as his large extended family.

Don was extremely active in the community and will be sadly missed by all.

Funeral following at Odelltown Church (245 route 221) at 2pm. Interment will be at a later date.

In lieu of flowers, donations to Jackson Cemetery or Odelltown Church can be made by cheque, care of Colleen Boyse, 8 Edgerton, Lacolle, Quebec J0J 1J0 or via e-transfer: ecboyse@aol.com

my sincere sympathy to Donny’s family and the Robinson family. Winona

My deepest sympathy to the Robinson family. My prayers and thoughts are with you.

Dear Craig,
My deepest condolences to you and your family. My he rest in peace with his beloved wife and give you strength to know that they are together again.

Dear Robinson Family:
Our deepest sympathy on the loss of your Father. Don was a real gentleman. Sorry we were not able to attend his service, but he was in our thoughts and prayers. He was a great guy to talk with especially about curling. Stephen was very happy to work with him on the Gordon Medal bonspiels. We will be sending a donation to Jackson Cemetery in his name. Again our sincere sympathy on your loss. He will be dearly missed by many.

Our deepest condolences, Craig, to you and your entire family. We have fond memories of your Dad as one of the kindest, friendliest people in the community and who was loved and respected by all. Wishing you strength to get through this difficult time.

Our Deepest Condolences to the Family,

Our condolences to the Robinson family on the passing of Don. He was very dedicated to his community and especially to the game of curling. Don was particularly proud of his role in the Gordon Medal competition and was a treasured member of the Governor General’s Curling Club.

He was a wonderful family man. I am sure he and Jolene were the “dream team” of their community in their time. I am sure they are with each other for eternity. RIP

Our condolence the family we will keep great memories of all the good times spent together as a councelman,firefighter, curler and a great person

Our heartfelt sympathies to all the family,
We have so many fond memories of Don.

Sincere sympathies , Craig, to you and your family.

My sincere condolences to the Robinson family

So sorry for your loss Graig.

My deepest sympathies Craig, to you and all your family.

DEEPEST SYMPATHY TO THE FAMILY.

Our Condolences
We will miss seeing Don at the cottage during warm summer afternoons looking out over the water. May he enjoy them again with Jolene.
Joe & Maria Alves & Family

Condolences to the family on your loss ! ( Husband, Father, Friend ) Enjoyed meeting and cajoling at curling events.

My sincere condolences to Don’s entire family’clan’, a fine gentleman he was & an inspiration to me at curling & a lot more, I enjoyed being with him on the ice as well as off the ice.

Ron and I were shocked to hear of Don’s passing….devastating for the family. May past memories of a life well lived carry you through the difficult weeks ahead.

Dear Kirk and family, please accept my condolences on the passing of your father. You and your loved ones are in my thoughts during this difficult time.

My sincere condolences to the family of Don. He was a good friend and will be missed by all that knew him. R.I.P.

We are very sad for your loss. Please accept my deepest condolences. May God give you the
strength and faith to go through this loss and may his soul rest in eternal peace. .

Tracy, Tim and family on behalf of your friends UPS Canada Security Department we extend our deepest condolences on the sudden passing of your dear dad. May He Rest In Peace.

Dear Brent, Craig, Kirk, & Tracey,
My family and I offer our deepest sympathy to all of you and your families. We remember The ‘Robinsons’ as a very close family and we’ve always admired that of you and your collective commitment to the farm, fun times and each other. I always remember waiting for you to ‘finish your chores’ before we could play volleyball, Pictionary or head out to the lake. These values carry on through you and your families. Don and Joelen had a profound impact on my youth which helped shape who I am. I’ve shared this news with my family, and from our family to your, we offer our most sincere condolences. With love from the Van Vliets: Kim, Karen, Kevin, Keith and Sheelagh.

We are very sorry to hear about Don (Donny). He was a good friend of our family for decades. His reputation will live forever in Lacolle, and his children and grandchildren and all future generations will keep his memory alive. May the love you have for him remain forever in your hearts. You have our deepest sympathy. Karen (Van Vliet) Tripp

Our sincerest sympathies to Don’s family, you’re in our thoughts and prayers.

Brent, Craig, Kirk, Tracey and families, our deepest sympathy to you all. I have so many fond memories of Uncle Don at family gatherings. He will be missed.
Judy and John

May peace be with you

We lost such a nice man.
My deepest sympathy to the entire
Robinson family.

Although our mind can understand how (and possibly why) we lose our loved ones, the loss of lo a parent, a grandparent, or a friend always hurts, and our heart goes out to you and all those who were close to Don.
Please receive our deepest sympathies.

Don was a wonderful man,
we met him at square dance and his “joie de vivre” was contagious. Always the first one to reach out to others, he leaves us with joyful and beautiful memories. He was a wealth of information and had the talent to communicate it along with the generosity to share it. (I vividly remember him telling us about a secret treasure of stolen british pay possibly buried somewhere on the US side).

We hope that the show of support from family and friends will bring you comfort.

Dear Brent, Craig, Kirk, & Tracey, please accept our heartfelt condolences to you and your families with the loss of your father. As we have visited Don over the years at various family occasions it was certainly a pleasure to learn he had many accomplishments alongside his family & throughout the community. We will miss Don. Please remain strong with the many fond memories we have shared over the years during this difficult time. Our sympathies Norman Labrèche & Family

Don will be truly missed
Sincere sympathies to the
Whole family

My most sincere condolences and love. I simply can’t picture the world without Don.

was such a big part of my adult hood, with New years eve skating and meeting after to bring in New Year and of course Canada Day. Now that my kids are grown . Well I am extremely sad

Hello Tracy, Kirk, Craig, Brent, i was very saddened to hear of the passing of your dad. I have a lot of fond memories of curling against Don at the Lacolle and Ormstown curling clubs. I even got to spare for him at the national firefighters championship in Valleyfield. He was always so much fun to be around at curling events. I learnt not to ever bet against him that he could not eat a whole lemon pie, i think that cost me a beer. He was a great friend and i will miss him a lot. PS I am sorry that i will be unable to attend his funeral but i will be thinking of him. I will be making a donation in his honour to the Odelltown Church.

All my heartfelt sympathies to the whole Robinson clan, so much sadness lately. Sending each and every one of you a big hug and know that you are all in my thoughts.

Thinking of Tracey, Tim, Tori and Tina and the whole family during this difficult time. May find memories warm your heart in the days ahead. Your cottage neighbours are there for you. Condolences from the MacKenzies

Dear Robinson Family,
I am so sorry to hear of Don’s passing. He was a pillar of the community and I am sure, a great support for you all.
Kindest thoughts and prayers for strength, Jude Beny

My deepest sympathies. I am so sorry I will not be able to attend the Funeral. I have a great fondness for Uncle Don.
I will try to reach out to you all in the near future.