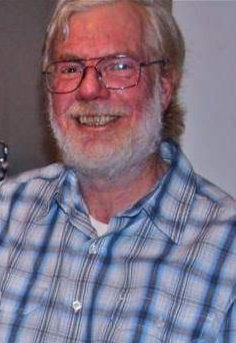 James F. Gregson, known to family and friends as “Jim,” passed away on Friday, June 26, 2020, at the Anna Laberge Hospital, at the age of 67. He is lovingly remembered by his daughters, Ann and Emily Gregson; ex-wife and friend, Janet Rokas, caregiver and support until his passing; sister, Carol Gregson; nephew, Jeremy Gregson; and many members of the Rokas family. Born in Montreal on October 5, 1952, Jim grew up in Greenfield Park. He is predeceased by his mother, Viola Newton Gregson; father, Frederick Gregson; and step-mother, Madeline “Molly” Campbell Gregson.
Jim attended Royal George High School and was a 1975 graduate of Concordia University. He spent some time outside of Quebec in the 1970s, working as a cage tender in a deep rock mine in Lynn Lake, Manitoba, and later as a set designer at Access Television in Edmonton. He enjoyed recounting his solo motorcycle trip across Canada in 1976. He moved back to Quebec in the early 1980s, first to Montreal and then to Hemmingford in 1988. James worked in the Audio Visual Department at Concordia University for many years, and was an active volunteer in the Hemmingford community. Those close to Jim knew him as a caring and compassionate man who always had time for the more vulnerable members of society and especially those who struggled with mental illnesses. He had deft hands, when turned to woodworking or playing the flute, and an inquiring mind that sought knowledge throughout his life.

Family, friends, and others whose lives Jim touched are invited to a Celebration of Life from 1pm to 4pm, with an Hommage at 3pm on Sunday, July 12, 2020 at:

A private burial will be held at Urgel Bourgie Memorial Gardens in Saint-Hubert. Charitable donations in his memory can be made to the Canadian Mental Health Association (CMHA), 500-250 Dundas Street West, Toronto, ON M5T 2Z5.

So sorry to learn of Jim’s passing. I remember him from the old AV days as a very kind person. My condolences to Janet and his daughters.

Just heard the sad news today. I enjoyed working with Jim in the a/v department of Concordia. He was a very funny, interesting and kind person. May he rest in peace. My condolances to his friends and family.

I am so sorry to hear about Jim. He will finally be at peace after his long and difficult struggle. The last time I saw Jim he stayed with me in Vancouver for a few days during his epic motorcycle trip across Canada in 1976. He loved every minute of it and even took me for a day trip up the Fraser Valley. He was a very competent rider but I think he had bruised ribs for weeks because I hung on so tightly. I have many fond memories of Jim from the Christmas parties and many family gatherings we had together when he was just a young guy growing up in Greenfield Park. He was always a very kind and gentle person. My deepest condolences to his family.

Jim’s very brave passing is a testament to his willingness to bear a lot of distress and suffering to spend his last days with family. May you rest in peace knowing that you were well loved. Love Carol.

Janet, we extend our sincerest sympathies to you and your family. Sally and Phil

May peace be with you

It is beautiful to read more about Jim, who I never met but heard such lovely things about from his sister, Carol. Set designer, AV guru, a life living and traveling across the best country — loved by a wonderful family… A good life well lived. May he and those he loved be at peace. Sending you our warmest thoughts. Love, Karen (Lording side of the family) and Derek

Remember Jim best from his earlier days in Hemmingford as a neighbor. I’m sorry for his passing, but glad that he has relief from his sufferings.

At this difficult time may you be comforted by the reminders of your loved one and by the memories that live in your heart…with sympathy.

Oh Annie and Emily we are thinking about you at this time. Hold the good memories close, your Dad will always be with you. Take care.

Thinking of you as you move through your grieving…

Our deepest condolences to Janet, Annie, Emily and all family members of Jim. Love Richard and Donna xo