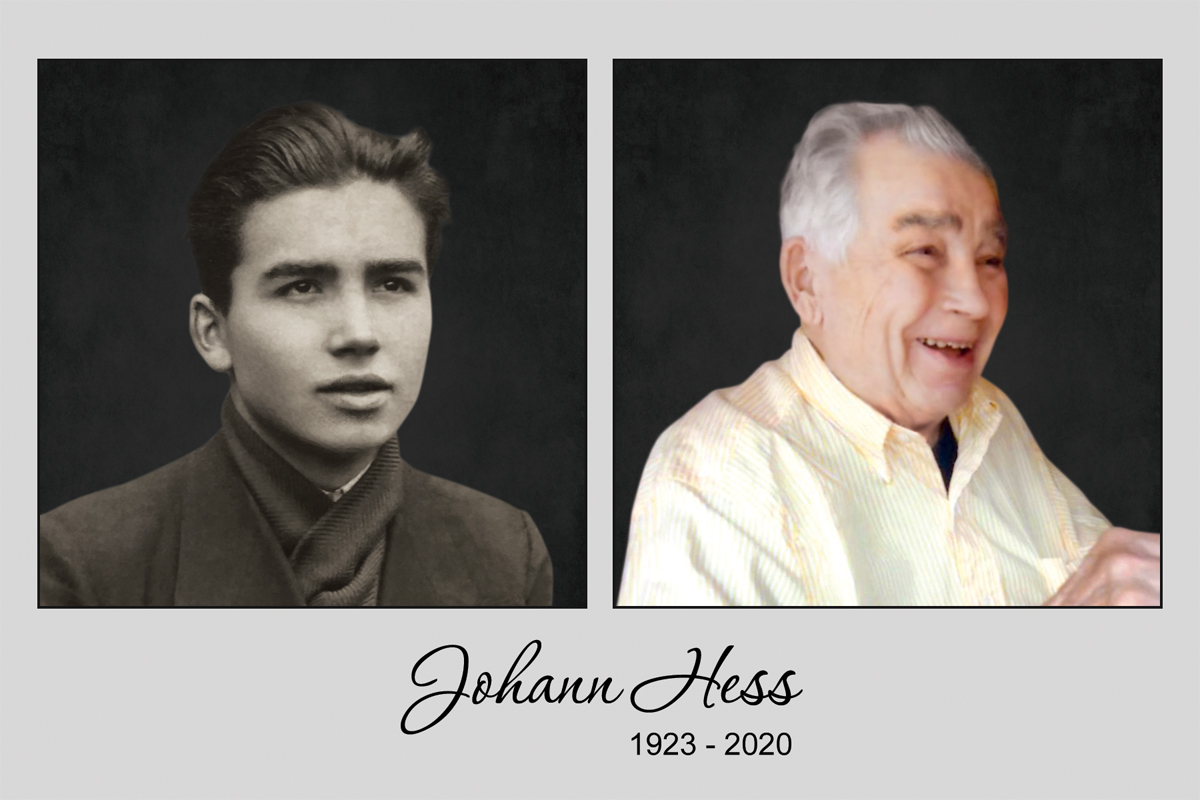 Johann (John/Hans) Hess passed away on Thursday, June 11th, 2020 at the age of 97. He died peacefully in his sleep with his wife of 74 years Theresia (“Resi” Hauser) and family by his side. Papa to Gisela, Margaret (Bob), Virginia, Jonathan and Opa to William, Gabrielle and Avery and Onkel to nephews and nieces. He also leaves behind his younger siblings, Rosa (California) and Lenz (Montreal) and their families.

John was born on February 7th, 1923 in Budaörs Hungary, a suburb of Budapest, as the first of three children to Johann Hess and Rosa Niedermeyer. Born between two world wars, early life was marked by hardship and a chronic shortage of food. These struggles aided in developing a strong work ethic that bloomed when he became an apprentice in a Budapest machine shop. While still in his youth, John witnessed the devastation of World War II, losing his village, his home and many of his friends and peers to the churnings of the Eastern front. Having withstood gunfire and shelling barrages, John spent the final year of the war with the occupation of his village, marrying his wife in a clandestine ceremony with wedding bands borrowed from her grandparents.

Although many generations were born in Hungary, both John and his wife were of Swabian descent (ethnic German). After the allies divided up postwar Europe, most of the village was sent to Germany as refugees. After living several years on a farm in Obrigheim near Heidelberg, the family was presented with the opportunity to emigrate to Canada, which was readily accepted. In 1951, after an arduous two-week journey across the Atlantic, they arrived with their young daughter in Montreal with nothing more than a ten-dollar note hidden in John’s shoe and with no language skills. This did not prevent John from quickly finding work and in only a few years, he had started his own business, a machine shop, out of the family’s garage in Ville LaSalle.

In 1962, the family bought land and a former general store outside the village of Hemmingford Quebec, and slowly moved out the family business. John worked as a machinist and a gentleman farmer, two passions in his life. Being a workhorse did not prevent John from enjoying time with friends, laughing and singing at the German social gatherings he attended until last year. He lived a life of self-discipline and quiet religiosity, having felt humbled by his survival through the turbulence of his youth.

Despite the waning health of old age, John stayed steadfast through every stage of elderly life, never losing his tenacity for work and his appreciation of good food. His shop coat will continue to hang beside his machine so that his spirit may inhabit one of his favourite places. For those who knew him, our father is remembered as a patriarch and as a strong and genuine man who loved and was loved.

We are deeply thankful to all members of the St-Rémi CLSC palliative home care team for their dedication and help with our father, allowing him to die at home. Our thanks also to friends and neighbours for their kind support and beautiful cards.  Prayers and a reading will be held at the machine shop for family and employees; no other service or memorial is planned.

We send our sympathy to the Hess family on the loss of their patriarch.
Over the years at social events when meeting up with Mr. Hess my sisters & l enjoyed listening to his interesting & reminiscing stories of his past which in many ways were similar to the background of our own parents, the
Enderle’s. He was a hard worker & a fine gentleman. He will be missed.
MadelineEnderle & Family Enderle

Condolences to the whole family, I worked for John, he was a good man, he showed me a lot. Rest in peace my friend.

I visited Hans several times in the shop working away at the little lathe.We always had interesting conversations.We pretty well shared the same values and told each other some not so clean jokes.Marlene and I miss him dearly.Our sympathy to all who loved him.

My sympathies to the family. I did not know Johann, but was in Virginia’s class at CVR. Living a long and full life does not lessen the loss. Yours, Bruce Barr

My condolences to all members of the Hess family .
Thinking of all of you and the admirable life he lived .
Sincerely
Michael Hadley